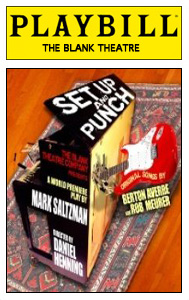 Set Up And Punch

She writes the lyrics, he writes the music. A clever songwriting duo’s promising relationship is blown to bits when they must collaborate with the sex-god singer-composer of a cutting edge rock band. Love gets sung in the wrong key, proving the old adage: there are two sides to every triangle.

This comedic, touching play will keep you laughing as you ride the groove of original songs by rockers Berton (“My Sharona”) Averre and Rob Meurer.

Cross They’re Playing Our Song with Will & Grace and stir in hip seriocomic undercurrents oozing with up-to-the-minute relevance. The result is Mark Saltzman’s deliriously funny and surprisingly touching world-premiere play, revolving around a Rubik’s Cube of crisscrossing motivations that prove all’s fair in love, war, and fervent showbiz ambitions. It’s hard to recall a play that explored the crazy world of driven creative artists this incisively or one with such a fresh and savvy view of of sexual politics in the 21st century. Director Daniel Henning and three pitch-perfect actors draw us into the giddy fun, then sock us in the solar plexus with the rueful emotional reality at the play’s core.p …read more