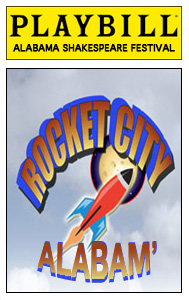 Rocket City, Alabam’ dramatizes a carefully hushed-up episode in the history of the American South. In the early 1950’s, at the dawn of the Cold War, Hitler’s top rocket engineers were quietly slipped into the U.S. to create an American missile program. These Germans had to be settled somewhere, and the spot selected by the U.S. Army was Huntsville, Alabama, a Southern town which happened to be home to a century-old Jewish community.

The battle of wills between Major Pike and Amy explores revenge and forgiveness, idealism and practicality, presenting these themes with sensitivity and a bittersweet humor. The Alabama townspeople are wise, greedy, petty, and deliciously funny as “little ol’ Huhs-vull” is transformed into Rocket City, Alabam’. This comedy-drama of a suppressed slice of American history is enlivened by some famous regional songs, including “Down By the Riverside,” “Alabama Bound,” “This Little Light of Mine.”