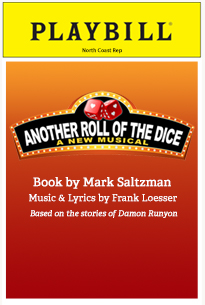 Another Roll of the Dice

It is a charming, funny, nostalgic, faithful, well-sung and well-produced show that creatively honors the memory of Runyon and Loesser. 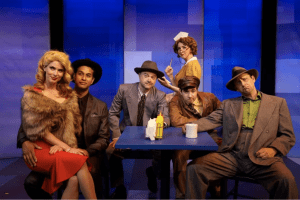 Saltzman told Playbill.com, “We imagined Guys and Dolls as a pastrami dinner at Mindy’s Restaurant and Another Roll of the Dice as a slice of cheesecake for dessert. Or maybe strudel.   …read more

Sometimes you win and sometimes you lose, but with Another Roll of the Dice you’ll find a real winner.

Six excellent actors, playing umpteen comedic roles adds up to one fun-filled evening you will love!

A roller-coaster of a musical ride through “Guys and Dolls” territory that will keep you giggling.

The characters are brought to life by this brilliant cast of performers playing multiple roles.

Mark Saltzman and director Larry Sousa collaborated to bring us more of Damon Runyon’s loveable gangsters, their Judys, and a few unlikely types who were swayed to the shady side for love or money in the world premiere of Another Roll of the Dice.   …read more

In the world premiere of the cleverly crafted story of shady characters and shady stories in Mark Saltzman’s musical comedy.