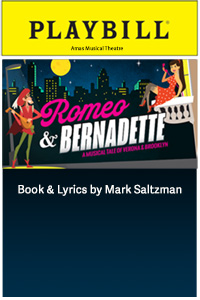 A LAUGH-OUT-LOUD FUNNY SHOW that’ll send you off smiling. Excellent performances feature some full-on belting and wow the crowd. For a fun night out, grab your goombahs and say, ‘Andiamo!’

THE PERFECT COMBINATION OF LOVE AND LAUGHS! To describe Saltzman’s show as something that simply ‘works’ is a complete understatement. It’s quite exciting to see a piece of theater fully take charge of itself, and Romeo & Bernadette is truly a model citizen of Off-Broadway productions. Say fuhgeddaboudit! to any show you were thinking about seeing this week and allow Romeo & Bernadette to sing, dance and perhaps even throw some Italian charm into your life instead.

A BROADWAY-QUALITY PRODUCTION IN AN OFF-BROADWAY HOUSE FOR AN OFF-BROADWAY PRICE. The cast includes Broadway alumni as well as some making their NYC debuts such as Anna Kostakis, who won the audience over with her beautiful voice and comedic skills worthy of a theatre veteran. The same could be said for the three handsome leading men, Burshteyn, Michael Notardonato, and Zach Schanne. Judy McLane gives a superb operatic performance. Michael Marotta adds old-world elegance and the scene-stealing Troy Valjean Rucker had the audience in hysterics. This endearing and hilarious story is a definite MUST SEE FOR MUSICAL THEATER LOVERS AND SHAKESPEARE FANS ALIKE.

If you like musicals, you like comedy and you like Shakespeare, YOU’LL LOVE THIS SHOW! The actors deliver their roles with comedic expertise and the exceptional performance by Judy McLane deserves a ‘Brava!’ I can’t imagine a more appropriate modern-day sequel to Romeo & Juliet. AMAS Musical Theatre’s production of Romeo & Bernadette couldn’t be easier to enjoy.