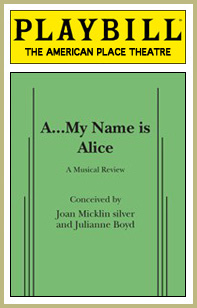 A… My Name is Alice

The revue consists of 20 songs and sketches, written by many hands and performed by five fizzy song-and-dance women. The subject of Alice is also women &emdash but the show’s feminism is worn lightly. If anything, women are as likely to be satirical targets as men. In one wicked number, “Emily, the M.B.A.,” a female business executive’s raised consciousness crumbles when she engineers a corporate takeover of a company called “Womantronics Inc.” In the evening’s one running gag, a woman poet recites a cycle of self-martyring verses &emdash all of which contain the accusatory refrain, “He did it/ he did it.” … Among the outstanding lesser-known songwriting teams on tap are Mark Saltzman and Stephen Lawrence (who are responsible for “Honeypot” and “Emily, the M.B.A.”); Maggie Benson and Cheryl Hardwick (“Sisters”); and Georgia Holof and David Mettee (“Friends”)…

A boodle of laughs.