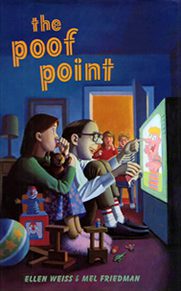 Marie and Eddie’s inventor parents have done it again. They’ve recalculated the quadrilateral dipoles, rummaged around in the fifth dimension, and come up with yet another of their whacked-out contraptions — a time machine!

As always when the Bickers start inventing, things go haywire. Instead of landing in the future or the past, Marigold and Norton are sent careening back through their own lifetimes. Their grown-up bodies stay the same, but their minds regress from sixteen-year-old science nerds to stubborn sever-year-olds to drooling toddlers! Eddie and Marie can’t imagine a worse nightmare- after all, who wants to baby-sit their very own parents? But they know it’s up to them (with a lot of help from scientific super-genius Ozzie Regenbogen) to figure out how to get their parents back to normal, before they reach the Poof Point–age zero, where anything could happen.